This website uses cookies themselves and third parties to provide you with a better experience and service.
When surfing or using our services you agree to our use of cookies.More information [Close this message]
Historical villages
Baix Empordà Burricleta Centre

You'll find Empordà's history with every step you take.  You just have to look carefully.  From small fortified villages to authentic, old cities.

On this Burricleta tour, you start at Gualta (9th century), going over its distinctive romanic medieval bridge (14th century) to go to Llabià (11th century) which is on a hill from where you can see the romanic bridge that links Empúries with the iberian town of Ullastret (4th century BC).  This is now a museum which you can visit if you want to.

The next stop is the walled town of Peratallada (10th century), very well preserved around the castle which gives it recognition as a National Place of Cultural Interest.

The first president of the Generalitat de Catalunya, Berenguer de Cruïlles (14th century) came from Peratallada.  Go to the tourist information office that you will find in the Plaça del Castell.

The pre-romanic church of Santa julià de Boada (10th century), Fontclara, Fontanilles (10th century) and again Gualta will bring you to the end of this little adventure through historic towns and pretty pathways

In the middle of Lower Emporda in Costa Brava, guests will enjoy a superb acompañada Catalan cuisine in a rural atmosphere and charming. Specialty in grilled meats, a large variety of entrants, salads and desserts in addition to our caseros. Extensive wine list, menus for groups, outdoor terrace on the plaza of the church, comedores interiors in a rural environment and an atmosphere of old stone and delicious flavors.

Restaurant Can Joan, in Boada's Sant Feliu, Palau-sator's municipal area, placed to l'Empordà's heart between Peratallada and Pals. He enjoys a few sights opened for Torroella's mountains, for Pals's old town and in the horizon it is possible to spy the sea, with the islands Medes of bottom. Wrapped in a wonderful landscape, it offers you: domestic kitchen with the products of the land (sea and mountain), taken care with the maximum rigor. Besides the known traditional kitchen and season, a letter that has a great variety of fished and rice to the casserole. Private dining rooms where to celebrate quite types of events and where to offer our familiar treatment.

Anyone that sees it can ask him what does this bridge here, but it does a few how many centuries, in the Roman epoch, when all his environment was flooded easily, it was of few steps to go from north to south. Now you will find shade and a source where occasionally it is possible to drink, but on which the neighbors of Llabià will say to you that before always it had water.

-Once you have gone through Ullastret, you will find the Pont de la Roqueta bridge, an excellent place for a picnic.

- We recommend visiting the Poblat Ibèric d'Ullastret, an extraordinary archeological excavation. If you ask, you can enter with the burricleta.  Open every day (except Monday), from 10am to 8pm (6pm in the winter).  More information at: www.mac.cat/Seus/Ullastret

- At Peratallada and Sant Feliu de Boada you will find a variety of restaurants and bars where you can refresh and re-energise yourselves.

- You can visit the historic centre of Pals on foot.  Remember to tie up your burricletas to something and take your GPS with you

- At Fontclara you can visit the church (10th century) inside;  Just ask for the key at the restaurant Can Pepó. 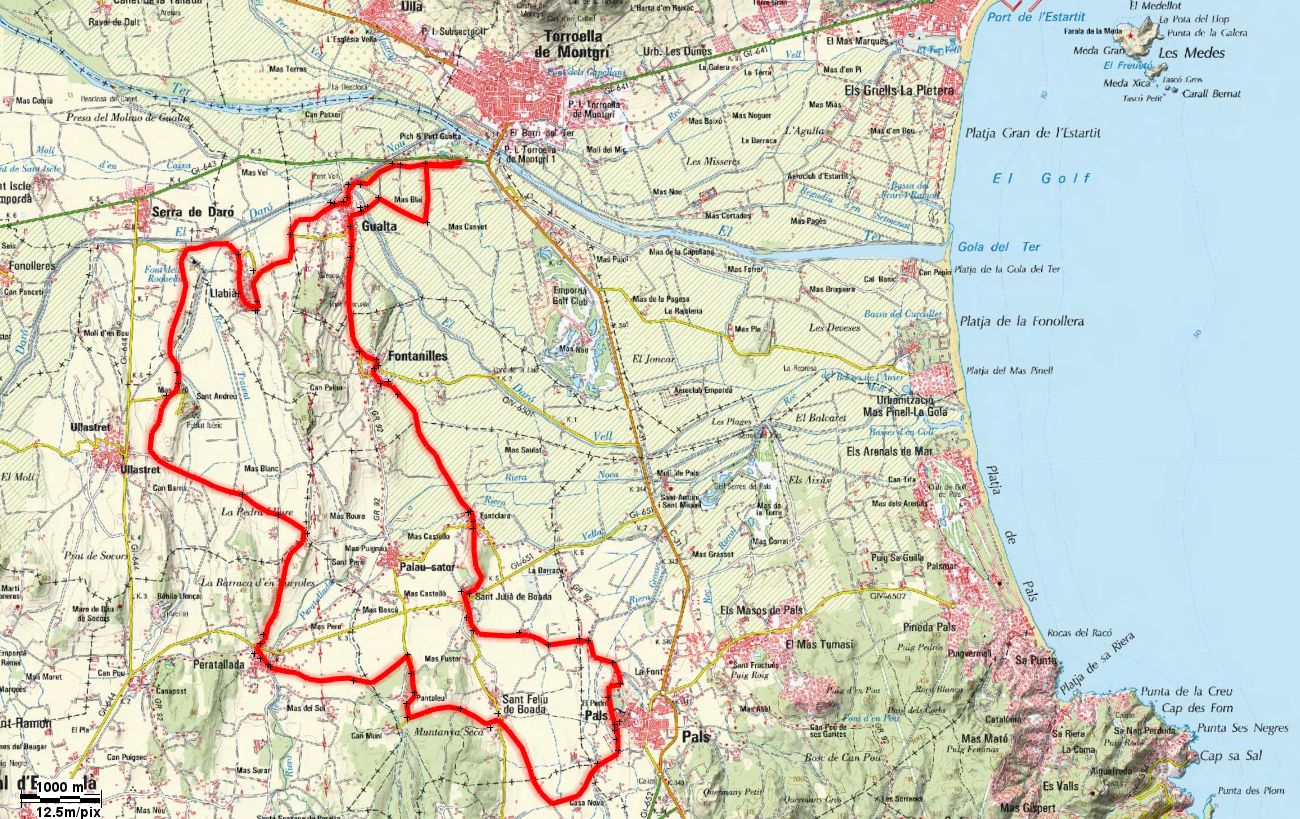